Veterans for Peace has recently delivered its fortieth water treatment unit to an Iraqi institution since this phase of the project commenced in 2006. Three Sterilights sent at the end of April were installed at girls’ elementary schools in Abu Ghraib, west of Baghdad, and Tharthar village near Samarra, and the third unit went to the alAlskari shrine in Samarra. 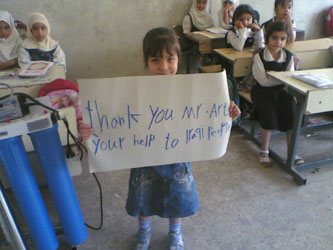 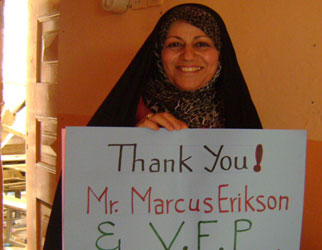 This last site should jog the memory of readers who are able to retain a long list of atrocities that followed like vicious unleashed dogs the bootsteps of our country’s 2003 invasion of Iraq. The criminal destruction of this shrine in February 2006, by alQaeda (?), touched off a critical mass explosion of sectarian violence that has not spent itself yet. Shias throughout the world revere this site as the burial place of Hasan alAskari, eleventh Imam and father of the long awaited Mahdi, who will one day reappear on earth and establish everlasting peace and justice. It is precisely this circumstance that set the mouths of the attackers adrool. The beautiful building together with its minarets and gleaming golden dome was nearly demolished. 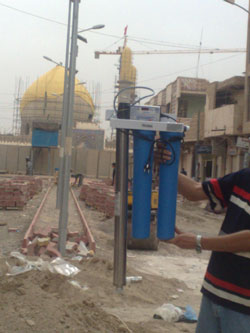 That was then. Today the resurrected building, still under scaffolding, is once more welcoming pilgrims. Our Sterilight water unit, installed the first week of May, will supply these pilgrims and other visitors with safe drinking water, and we are most grateful for the opportunity to be part of this renewal. God grant that atrocities like this monstrous bombing disappear into the past, that Iraq itself be resurrected, independent, in possession of its own soil and resources, and free of occupation. We insist the United States do its part to make this happen. Let the pilgrims of alAskari have good water, let all Iraqis have their country back. 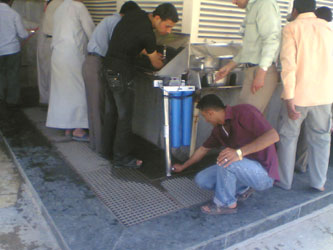 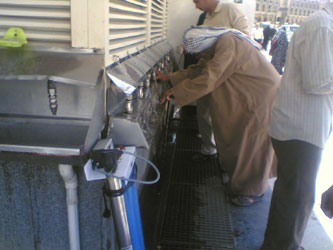 A few weeks prior to this installation, we delivered three Sterilight units to a village of Misan Province in the south of Iraq. Within this province are the remains of what were once extensive marshlands, an area especially rich in history and inhabited by the Ma’dan people, or Marsh Arabs. Their way of life, and particularly their interesting bundled reed architecture, is as old and unchanged as anything in all Mesopotamia, indeed on earth. Pictured here is a traditional tribal guesthouse, or mudhif, which---excepting the ceiling fans and the IWP water sterilizer---is identical to similar buildings portrayed in the earliest Sumerian artworks, dating to 3000 BC and before. For 50 centuries the Ma’dan people maintained a way of life based on fishing and cattle breeding, until Saddam’s regime drove them out and destroyed their livelihoods by draining the swamps. Marsh Arabs are Shia and the swamps provided cover for Saddam’s Shia enemies. Only a small remnant of the swamplands remains, the rest is now desert and probably irretrievably lost. As with the alAskari shrine, we were glad to give a little help to people of such historical significance. 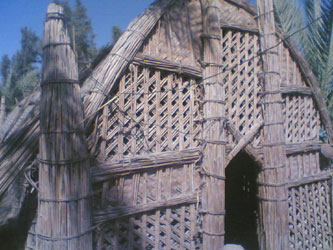 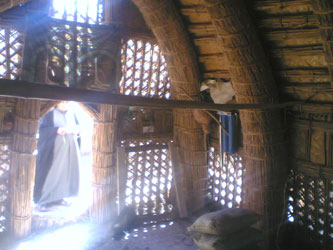 There is a small downside: the Baghdad technician installing this unit and two others in a nearby school and clinic, fell out of the boat, banged up his head and lost his camera in the water. City people of Iraq are not notable sailors.  We have replaced the camera.

Additional work accomplished since last report includes Sterilights installed at village clinics near Karbala and Falluja, and in a girls’ school in the Yezidi city of Sinjar. Two units were set up at an abandoned Iraqi military base at Kirkuk, which now serves as an impoverished, almost functionless refugee encampment. The desolate scene of this last site is a perfect metaphor for the folly and waste of military overreach. Americans take note: this could be one day our desperate citizens in one of our abandoned installations when we have reduced ourselves to this condition. Perpetual all-spectrum dominance is melting the credit card.

To top off the above, IWP is also cooperating with Muslim Peacemaker Teams, Iraq. One co-op filtration unit has been installed by MPT at an elementary school in Najaf, and another is on the horizon. Funding for this work is the product of Dr Marcus Erickson’s speaking engagements and bicycle tour of the west coast, Vancouver to San Diego. Marcus, who holds a doctor’s degree in ocean science, recently sailed to Hawaii and back aboard a wind driven junk created from plastic refuse, his purpose to document and report the contamination of the entire North Pacific Gyre with imperishable plastic detritus. Talk about a water project. And now, accompanied by his fiancee, he is speaking to all who will listen about what is happening to our oceans as a consequence of our squalid abundance. A related topic of his talks is the dire water situation in Iraq. Money raised through these events are conduited through our vfp project to Muslim Peacemaker Teams and schools in the vicinity of Najaf, Iraq. Take a look at www.algalita.org or www.junkraft.com if you would like to learn more about Marcus and his interesting organization.

One last thing: Faiza alAraji, our indispensable Iraqi water engineer friend and accomplice, has put off her anticipated return to Baghdad. This is, for us at least, good news. Also through Faiza’s contacts, we now have a way to purchase the Sterilight units in Iraq itself, instead of Amman, as previously. The new way represent considerable savings in transportation and border fee costs.

As always, on behalf of the project and the many Iraqis it serves, I thank all donors, supporters, and others interested in this work. And I especially want to thank the dedicated Iraqi technicians in country who often take considerable risks in carrying out the work of IWP. Iraq is still barely teetering on recovery, and as we are the invading and occupying power, our debt to its people will not go away. Ever.