With every apology I note we have neglected to update this website for quite some time.  Lest you think we have run away with donor money and are currently oiling down our sleek bodies on a Princess cruise, I add the following:

The Hamden Jisr project is running behind schedule.  Initially it was delayed by insistence on the part of the Iraq Water Ministry that repairs had to include a major expansion of the plant capacity, a project well beyond the means of Veterans for Peace.  Once it was agreed that could not happen, at least for now, repairs were begun.  The original target date for completion was last July, but the work is still under way.

Two days ago a new complication inserted itself.  Federal agents entered the Detroit offices of our partner Life for Relief and Development and seized computers and other records.  The investigation concerns Life’s work in Iraq prior to the 2003 invasion, involving the possibility that they may have violated some provision of the US sanctions against Iraq in place at that time.  I find it a supreme irony that one of the reasons the US invaded in the first place was to bring these destructive and inhumane sanctions to an end, as they were rapidly corroding America’s reputation in the world, and now, three years later, one of the last American NGOs to courageously stay on and keep working is attacked on the basis of these same expired and idiotic sanctions.  The law truly is, as a Charles Dickens character said, a ass.

Life’s Baghdad office was once raided by occupation authorities by mistake, and that incident faded out.  We hope the same will happen now.

Looking to the future, Iraq Water Project is investigating the possibility of sending one or more hand-transportable water filtration units into al Qaim or another of the Anbar province towns where our troops have done heart-arresting damage.  These units produce sufficient quantities of clean water that they might be useful in a clinic or school, if any are left open.  This website will carry details when available.

Thanks, everybody, for your patience. 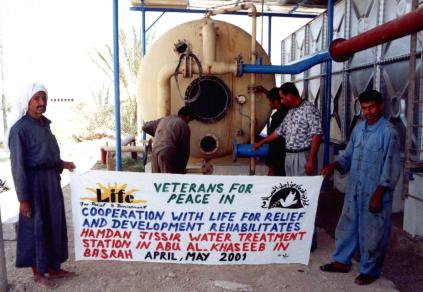